What is Single Crystal Piezo or PMN-PT?

What's all this buzz been about single crystal piezos? What are they and why are they better than traditional PZT, are they even better?

In this article I'll give you a bit of the background on what makes single crystals different in history, construction, and performance. But I won't stop there, I'll also provide some application guidance to help you understand where single crystals may be a better choice.

And here at PIEZO.com we provide single crystal ceramic and PZT which we encourage you to do some testing of your own as well!

Piezoceramics (i.e. dielectric ceramics with ferroelectric properties) were demonstrated during the 1944 in the USA driven in large part by Navy requirements for more powerful more robust acoustic sources for underwater sonar. The WWII state of the art sonar was a natural crystal, potassium chloride (KCl). By comparison to the piezoceramic Barium Titanate (BaTiO3) potassium chloride compositions (Kcl’s) were an order of magnitude weaker and (believe it or not) water soluble! In rapid succession the other now familiar Lead Zirconate and Lead Titanate (PbTiO3, PbZr03 ) piezoelectric ceramics were developed to increase the output power to around 1000 times that of the natural crystals, with no compromise in robustness.

The ceramics, fabricated by sintering powder particles together, so the actual base crystal cells have their axes randomly oriented. So the electromechanical conversion properties of the bulk ceramics are not as good as the base crystal cells – they are averaged over all the possible cell orientations, which includes a fair number of off-axis ones that contribute zero to the average macroscopically measurable coupling.

Material scientists have always known that a pure macroscopic piezoelectric crystal of the lead-based class (with its inherent axes intact throughout its volume) would have a phenomenal coupling. But the problem of growing such a pure crystal was formidable. Reports and research papers of solid electromechanically active crystal compounds with phenomenal self-strain coefficients have been around for decades without ever leading to commercially available product.

Piezo.com is now developing products which incorporate a single crystal PMN-PT class relaxor ferroelectric. We are working through some actuator and harvester applications which will require a versatile compromise PMN-PT material with performance that eclipses piezoceramics, but which is available in higher volume / lower cost (not low cost!) than has heretofore been available. While we are at it, we thought we would make the candidate material available for research and development via Piezo.com right alongside our other ‘tried and true’ piezoceramics.

PMN-PT has already been demonstrated to put far more ultrasonic acoustic energy per volume than any piezoceramic material. This property has already been applied in the manufacture of ultra-miniature ultrasound sources that go into exploratory catheters that can scan the tissue quality of arteries and artery walls from inside!

The first thing to realize is that PMN-PT is NOT a simple substitute material that can be cut to the same shape and be a drop-in replacement with improved performance.

In practice the layers of PMN-PT will have to have a ‘polarization maintenance bias voltage’ on each layer of the device. The electric field resulting from this voltage will prevent the crystal from depolarizing and losing it’s high coupling coefficients under the influence of a) high mechanical strain, b) electric fields superposed in the reverse poling direction, and  c) environmental temperature variations. Piezoceramics can benefit from a bias field as well, however they have a very wide ‘Mech-Elec-Temp’ operating zone compared to PMN-PT and most piezoceramic applications don’t require the field.

Typical PMN-PT bending motor (i.e. bimorph) construction will be what Piezo.com refers to as “Y” polarization (also called ‘parallel polarization’). In order to obtain full performance and capitalize on the high ‘31’ coupling for this material the center electrode of the ‘sandwich’ must be used, as well as the two outer electrode faces. The “X” polarization commonly used for piezoceramic bimorphs in which require only contact to the outer surfaces is not recommended.

Here is the typical construction, wiring and electrical drive scheme for optimum performance. The PMN-PT plates are continuously biased in the poling direction with  V+, and the signal voltage (AC or DC) is superposed on top of the bias voltage (e.g. with a summing amplifier). This is not the only way to drive a bimorph part with a bias, but it is the safest way. It keeps the ‘touchable surfaces’ at ground potential and eliminates the shock and electrical short hazard almost entirely. 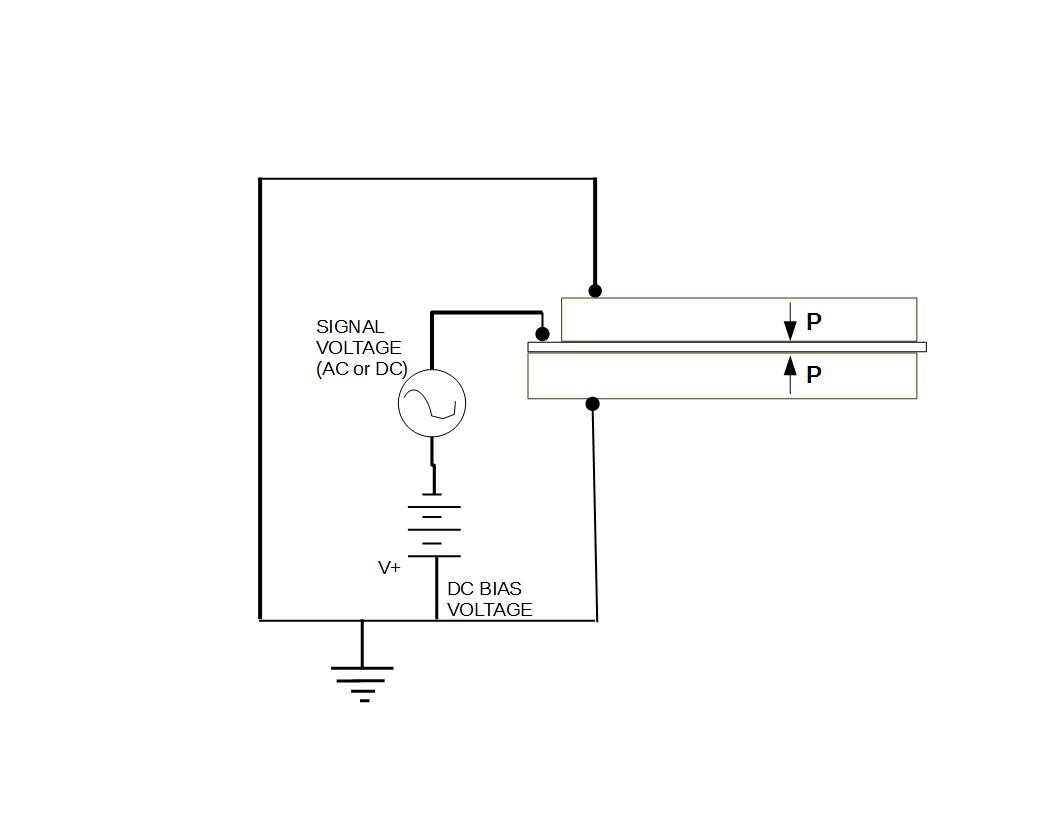 4. Its elastic modulus (inherent stiffness) is quite a bit lower than PZT

By analogy to a rubber band, it is weaker, more ‘stretchy’. But in compensation it can stretch farther than piezoceramics before reaching the breaking point. So it has higher strain capability. In order to capitalize on it’s higher mechanical energy output capacity the design of any composite structure must be made so that the PMN-PT goes to it’s full strain capacity. This factors heavily into any design optimization, and is the primary reason that PMN-PT parts can not simply be substituted for PZT parts with expectation of fabulous improvements.

5. PMN-PT is currently only available in smaller size sheets.

This is simply due to the fact that this material is in fact GROWN, crystallized out of a carefully controlled melt, and there are limitations involved in this process (oven temperature uniformity, control, gravity, etc) that are not consequential for ceramics manufacture. 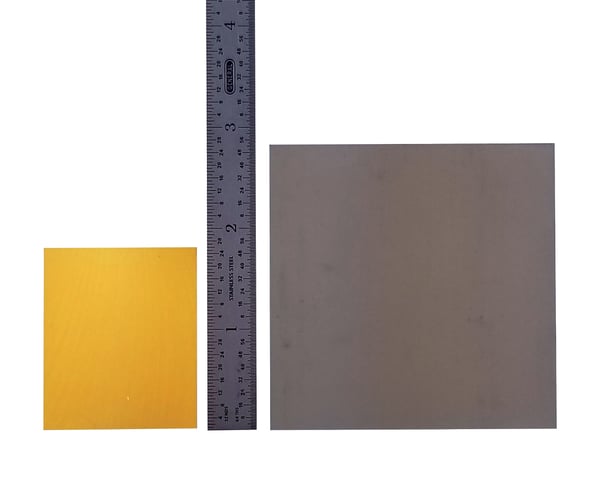 The second thing to realize is that for your trouble, you get greatly improved performance. Here are some comprehensive charts comparing PMN-PT properties with our PZT5A-ENH:

How much better is it really? This is an area that is not well researched, particularly if you are talking about pushing the envelope. Here is a side-by-side power generation comparison for PMN-PT vs PZT.

In this experiment two identical harvester piezo plates were affixed to identical aluminum beams, one PZT5A and one PMN-PT. The plates were placed in identical locations on the beams, and the beams were then clamped as cantilevers. Each beam was subjected to the same initial flexure displacement and suddenly released. For assessment of energy output varying resistor loads (again identical) were attached to the piezo outputs. 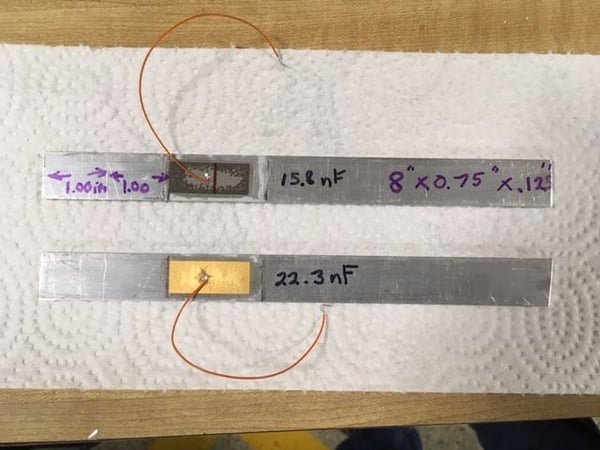 Here’s a typical oscilloscope output of the ‘ringing’ signal across the load resistor: 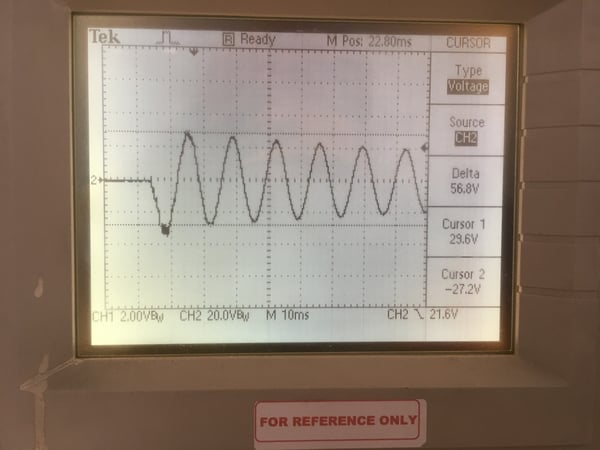 This is a plot of the peak power outputs from the second peak in the damping cycle for each resistor trial. 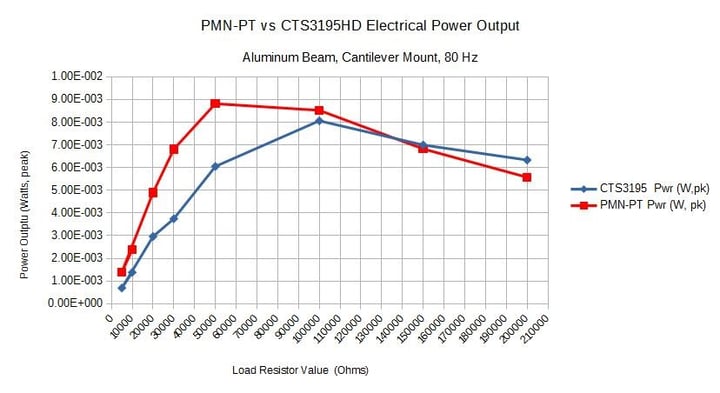 Note that while the PMN-PT is much better than the PZT, it is not fantastically better. This is because both of them have the same strain. When each is driven to it’s own max the output of the PMN-PT delivers

One way to deploy PMN-PT as an actuator is to use it just like a piezoceramic. This should be considered for low voltage applications only such as battery operated instruments, light vibration control, fans, etc. The electric field should be kept below 120 V/mm, which for our parts means below 30 volts on a single layer. At 40 V drive some depolarization related decline is already detectable.


To get the absolute most motion out of the part a bias voltage must be applied to the part whenever in use. The purpose of this voltage is to offset the applied voltages so that the part never sees a reverse polarization electric field higher than 120V/mm. This complicates the drive circuitry somewhat, but really boosts the mechanical power output. 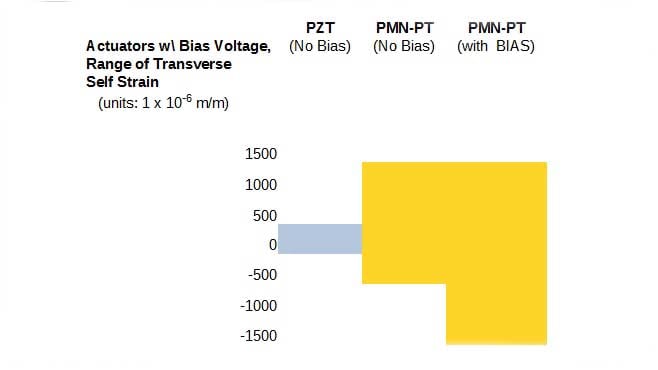 PMN-PT can accomplish identical passive mechanical damping with approximately ½ the the volume of a comparably performing PZT damper, OR it can accomplish twice the damping with the same volume of material. The most common passive damping configuration is the shunt damper consisting of a simple resistor wired from one electrode to the other. More effective but involving more parts and design effort is a shunt damper consisting of a resistor and a series synthetic inductor.

As with flexure actuators (bimorphs or appliques) it is recommend to design PMN-PT dampers with a bias voltage to counteract the effects of stress and environmental temperature.

So there’s a quick introduction to PMN-PT electromenchanically active materials from an applications perspective. The material offers higher coupling, higher energy density for actuator applications, higher output density for harvester applications. It is significantly different than familiar piezoceramics in its mechanical attributes.

Generally speaking applications of PMN-PT must be thought through carefully and designed from the ground up rather than being an "new and improved" replacement scheme. Those applications will be niches which are not possible to enter with traditional piezoceramic or piezoelectric materials, and therefore offer a premium to their developer/marketers.

We are excited to do developments on some of these applications here at Piezo.com, but of course we won’t be discovering anywhere near all of them. Why don’t you jump in? 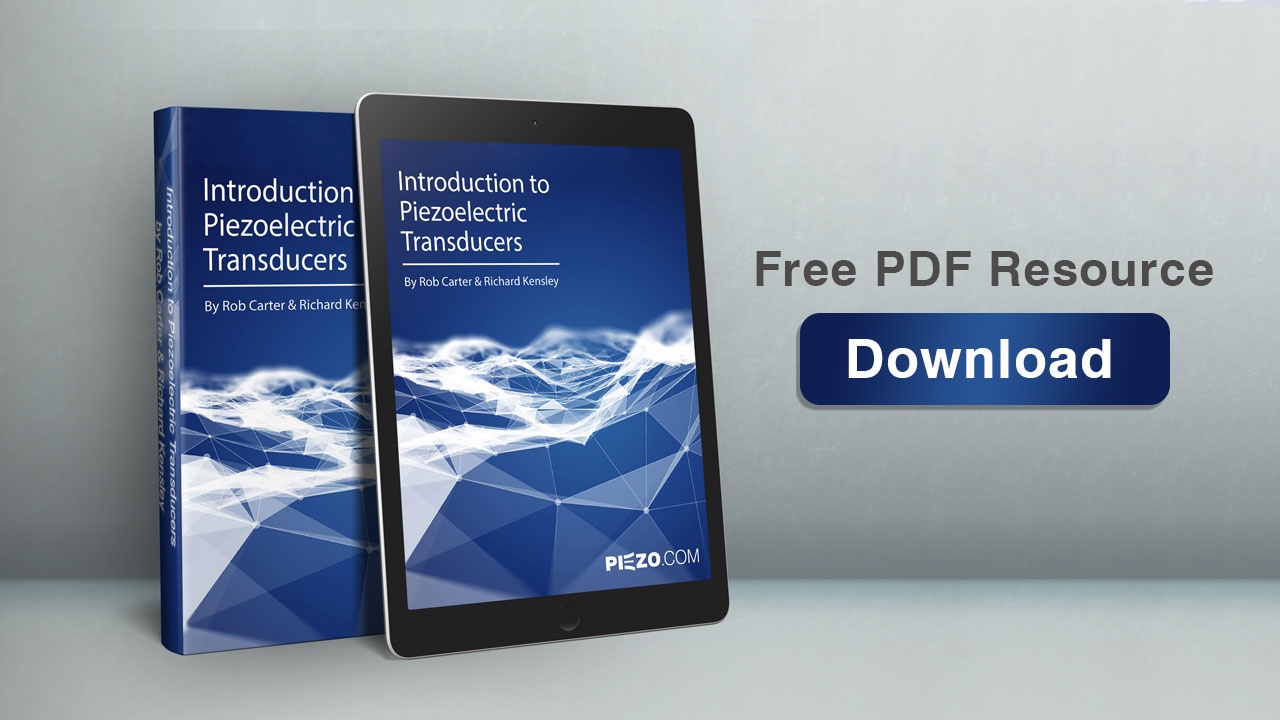