Piezoelectricity can be used in many different applications including refrigerators, washing machines, industrial equipment, vehicles, and wearable devices. These applications cause vibrations which allows for the piezoelectric effect to occur. In this post, I’ll give you an overview of how piezoelectric components can be implemented within wearable devices. I will state some of the design challenges that are associated with these types of devices and some of the exciting applications where these devices are essential.

What is Wearable Technology?

Wearable technology is any electronic device or computer that is built into clothing or compact accessories and can be worn on or incorporated into the body. Many of these devices collect and communicate information wirelessly through apps or the devices themselves. 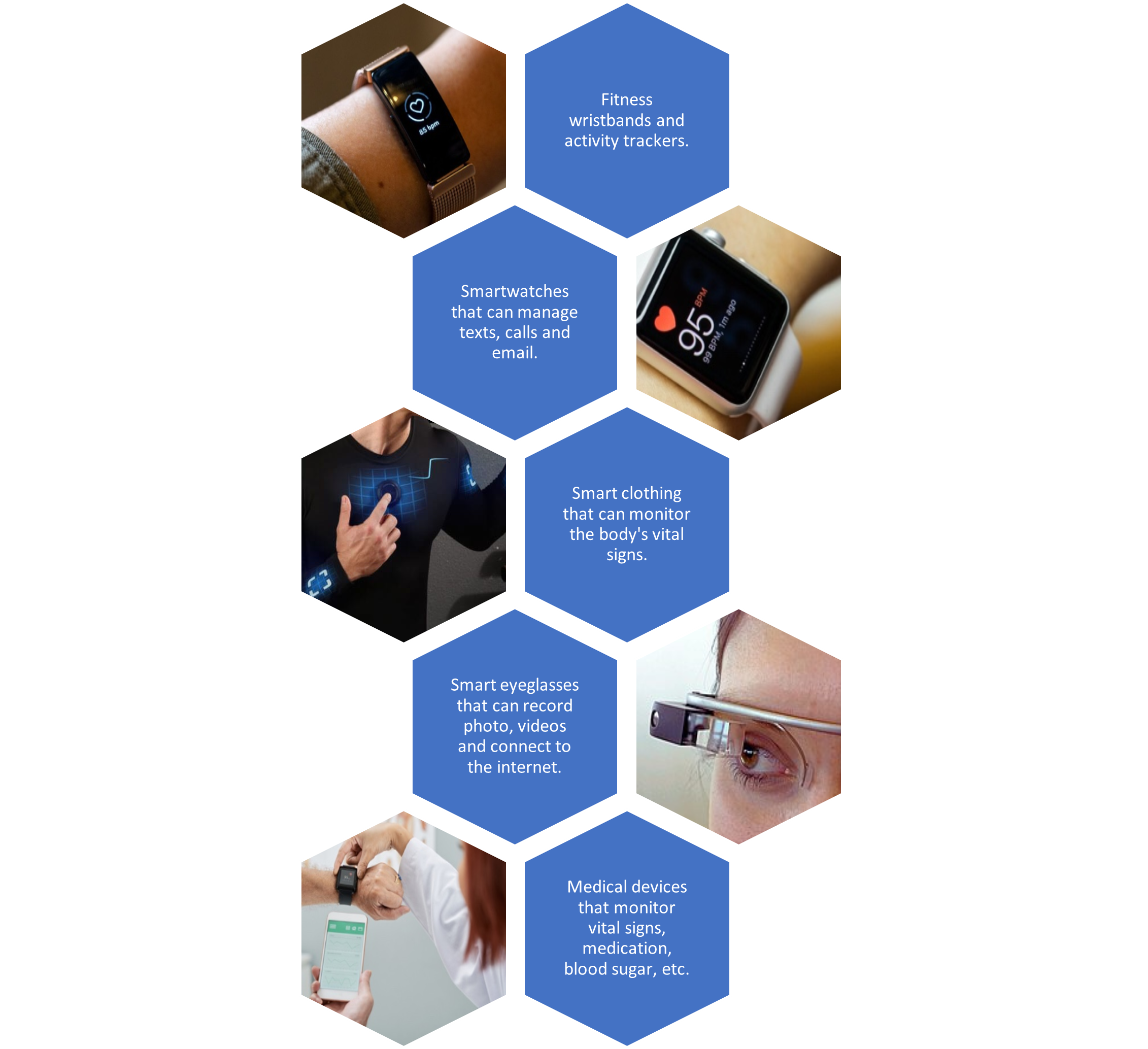 Their small size, portability, and ability to perform a variety of functions make wearable devices extremely popular with consumers.

How Can Energy Harvesting Be Used with Wearable Technologies?

Energy harvesting has the potential to forever change the way wearable technology is used. Wearable devices would essentially be self-charging and self-powering. Consumers would be able to use devices with little to no need for batteries or electricity to charge.

The desire for wearable devices to be inexpensive, compact, and powerful has pushed their producers to explore different methods of energy harvesting. Self-powered technology means that the device can maintain its own operation by collecting energy in the working environment without an external energy supply. The effective collection of various forms of energy in the working environment is the basis of self-powered technology. The energy sources available for portable and wearable electronic devices, such as thermal, solar, kinetic (including piezoelectric, triboelectric and electromagnetic sources) and RF energy are extensive.

While all these energy methods show potential for use within wearable devices, each has their own advantages and limitations. The issue is not so much with creating enough energy to power the device, but more with the energy draw created by the constant connectivity with Bluetooth, Wi-Fi and other wireless signals. While current energy harvesting methods have proven effective in extending rather than totally eliminating batteries from wearable devices, research continues to bring the ultimate goal of complete battery replacement closer to fruition.

How do Piezoelectric Components Play a Part in Wearable Technology?

The use of piezoelectricity stands to reduce, or even eliminate, the need for frequent charging of devices and batteries. Consumers will no longer be burdened with having to be near an electrical outlet, which will in turn conserve electricity. As a result, wearable devices and more efficient batteries will have longer usable lives. This will also reduce the environmental hazards presented by the frequent disposal of batteries and electrical components into landfills.

Harvesting energy using piezoelectric ceramic involves the conversion of energy from vibrations that occur during walking, breathing, and moving on many parts of the body. 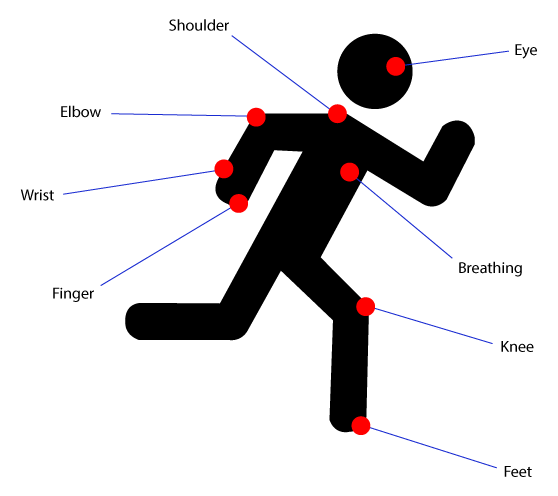 When stressed, piezoelectric components create an electrical current that can be immediately used or stored. The amount of energy produced is still relatively small and required body movements aren’t often regular and predictable. Also, a large surface area is often necessary to harvest a sufficient amount of energy. This presents a challenge when thinking of the small size needed in wearable devices.

Two promising factors in surmounting these obstacles are the versatility of piezoelectric components and the fact that the efficiency of piezoelectric energy harvesting has increased, while the power requirements for current wearable devices have been reduced.

Piezoelectric vibration energy harvesting is the preferred method for use with wearable devices since it is the most capable of producing the power level needed for small-scale devices.

Summary of Piezoelectric Energy Harvesting Techniques from the Human Body

There are two kinds of mechanical energy that can be scavenged from the human body. The first is related to continuous activity, such as breathing and heart beating; while the other is related to discontinuous movements, such as walking and joint movements. Of these, the process of walking produces the largest amount of power compared with other body motions. It has been recorded that a 68kg man is able to generate 67W when walking at a speed of two steps per second. The easiest way to harvest this energy is through piezoelectric shoe inserts.

Body joints are also attractive locations for harvesting energy due to their high motion amplitude, fast angular velocity, large impulse force, and high frequency of use in daily human activities. For example, the knee joint produces high biomechanical energy since it generates a larger torque in comparison to other human joints. Knee joint motions are often related to gait motion, where walking and running frequencies are normally in the range of 0.5-5 Hz.

Even for relatively minor activities such as eye blinking, piezoelectric transducers have effectively been used to convert motional energy into electricity. For example, a self-powered sensor was developed for both energy harvesting and health rehabilitation monitoring, which was based on polymeric piezoelectric nano/microfibers.

Furthermore, continuous energy can be harvested from the process of human breathing. There are two kinds of energy that can be collected in this case. The first relies on scavenging energy due to the intake and release of air, which can produce approximately 1 W of power. The other relies on chest expansion, which requires a tight band fixed around the chest of the user to generate around 0.83 W when breathing normally.

Piezoelectric components can be used for wearable technologies and other new technologies. Their use presents vast possibilities across many industries. Human comfort, convenience, health and safety have the potential to be greatly improved with the availability and use of products containing piezoelectric components. Many of these capabilities and products are already emerging in today’s society.

Some wearable sensors on the market today include fitness and activity wristbands and monitors that observe distance, respiration, heart rate, and even sleep patterns. Wireless blood pressure cuffs measure patient’s blood pressure through a phone app. Quartz watches have been around for a long time and employ the natural piezoelectric property of quartz to keep precise time. Monitors that detect and measure fetal heartbeats use piezoelectric components to convert the vibration into a readable signal.

The use of “smart” fabrics is also gaining popularity. The flexible fabrics are infused with piezoelectric materials that act as sensors to measure, monitor, and harvest energy. A single pressure-sensitive layer is sandwiched between two conductive layers. These sensors are currently being developed for use as shoe insoles, clothing, and wearable devices that measure information such as pressure, steps, energy expended, etc. The amount of energy created by the fabrics differs with factors such as the type of piezo material used and the movement of the user.

There are challenges facing the design and implementation of piezoelectric technology within wearable devices.

Textiles that have a greater elasticity perform at a greater efficiency when harvesting piezoelectric energy. The greater elasticity of the material increases the stresses occurring in the garment and, consequently, increases the elongation of piezoelectric elements. In addition, the garment must be form fitting in order to increase the clothing pressure and increase the piezoelectricity efficiency by increasing the strain exerted on the harvester on the garment. However, with this increased tightness of the garment on the user, this subsequently restricts the user’s movements and their ability to harvest energy. 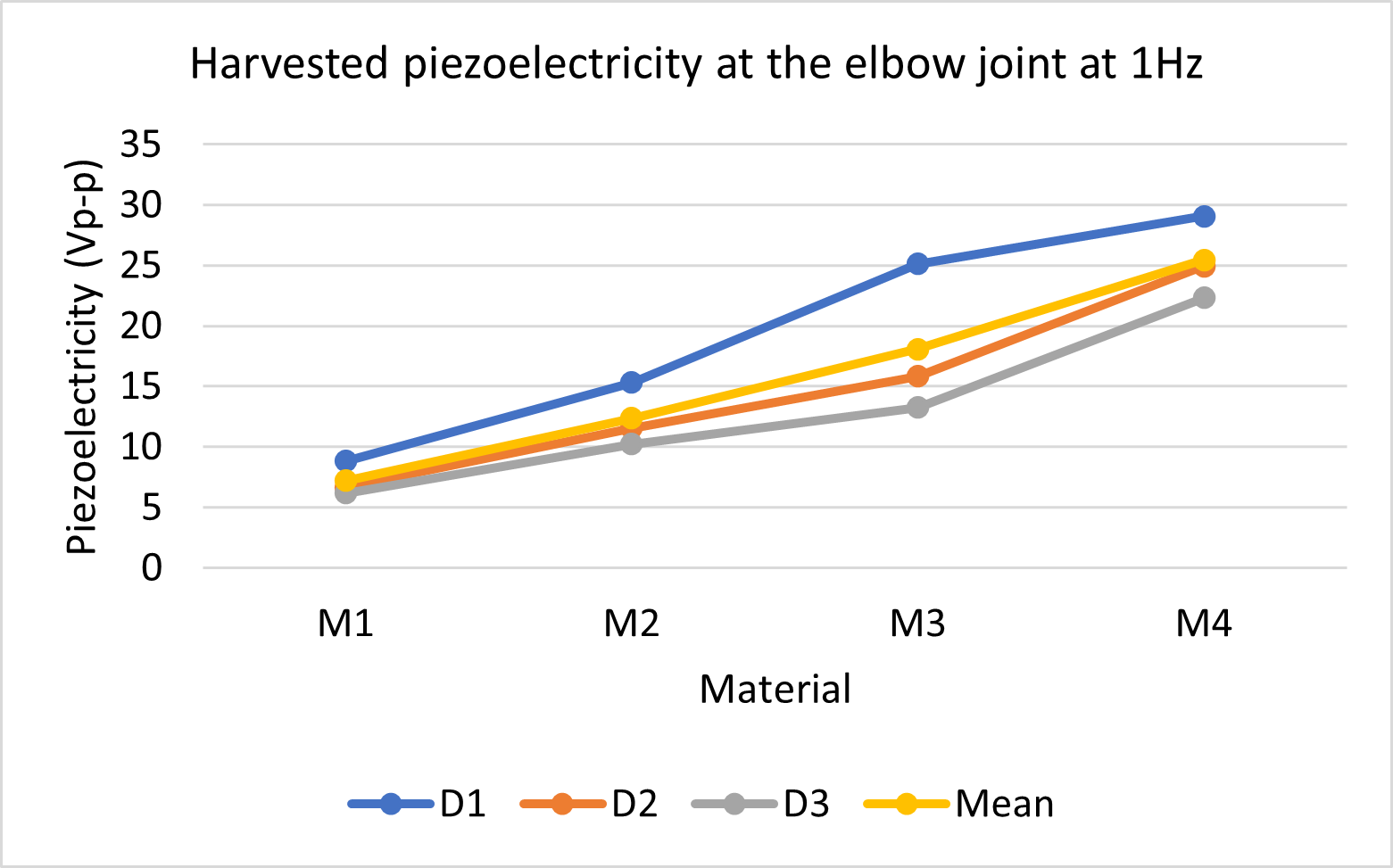 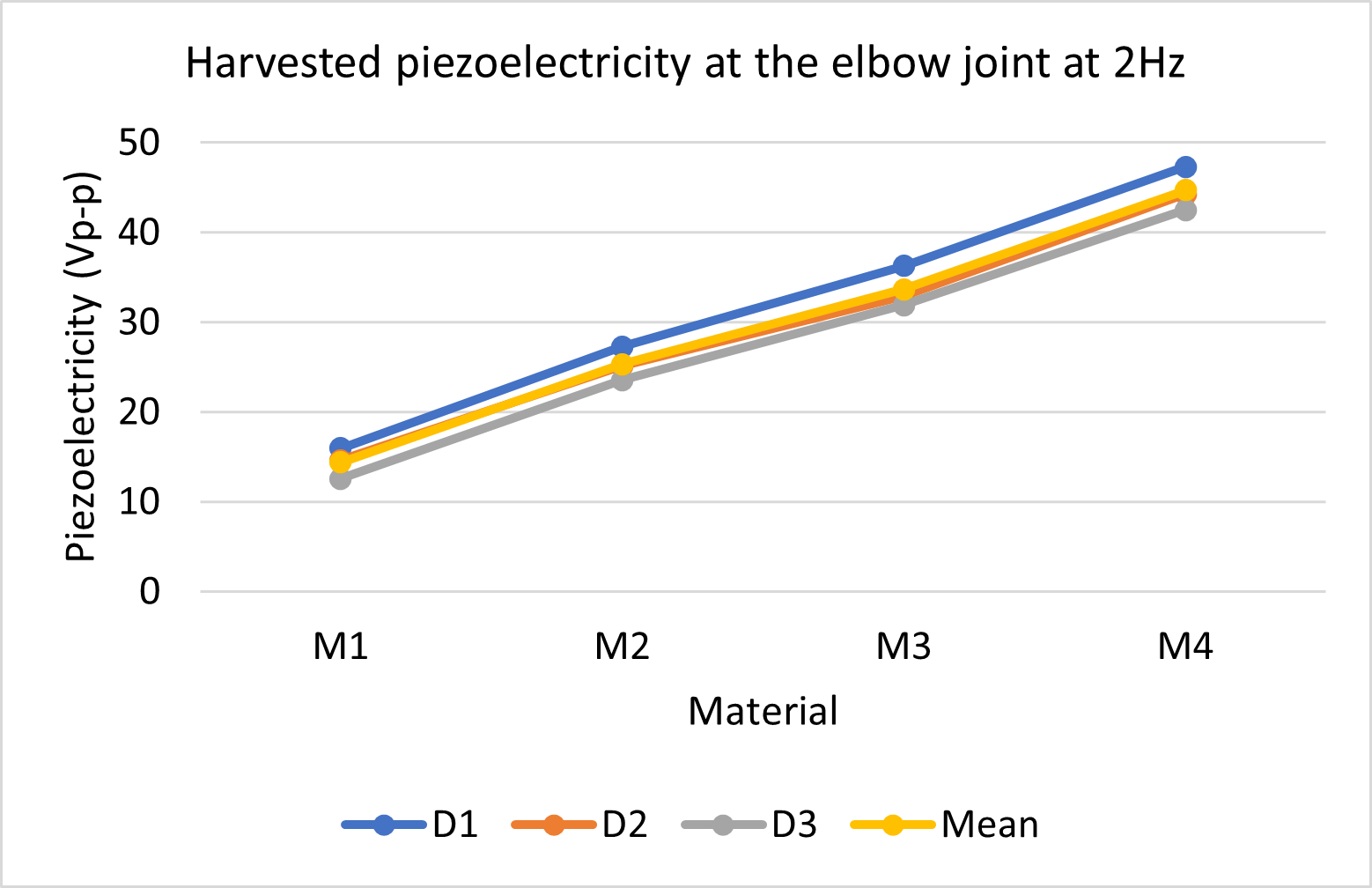 Energy harvesters are required to have high environmental durability and operational reliability. However, in the case of piezoelectric energy harvesters, the material properties may change during the manufacturing process, even if the piezoelectric effect is caused by intrinsic physical properties such as the crystal structure of the material. When a strain is repeatedly applied to a material, macroscopic cracks may occur resulting in a drop in the amount of power generated. Clarifying the mechanism behind the deterioration of materials that occurs during the conversion of kinetic energy into electric energy and taking countermeasures are challenges for piezoelectric technology.

It is a well-known issue with piezoelectric energy harvesters that they do not harvest energy efficiency at varying frequencies. These devices operate at a high frequency whereas humans have an ultra-low frequency of around 1Hz. As the operating bandwidth of piezoelectric energy harvesters is quite high, this significantly limits their utility within real world applications in wearable devices. In addition, the motion range of humans is usually much higher than the predetermined device size and so resonant devices cannot render the advantage of powerful magnification. The operating excitation frequency must fall in the resonant frequency range of harvester so as to obtain the best results. Most commonly, the frequency up conversion technique is used to overcome this hurdle. Mostly, mechanical plucking mechanism by using piezoelectric bimorph was used for frequency-up conversion to power low-powered electronics. However, these devices showed some drawbacks such as reduced longevity due to direct contact between bimorph and plectra and noise. To overcome such challenges, a prototype for piezoelectric knee-joint EH by replacing mechanical plucking by the non-contact magnetic plucking device to perform the frequency-up conversion and achieve a power output. In addition, piezoelectric vibrational EHs with a flexible 3D structure fabricated by a microfabrication process can cover low frequencies and achieve a large strain.

Future Considerations and Complications for Wearable Technology in General

Before portable and wearable self-powered system can move toward large-scale practical applications, there are still many problems that should be fully addressed soon. Most wearable and portable self-powered systems are based on flexible materials, which experience device performance degradation during long-term operation. Therefore, in the future, we should study additional material and structural designs to improve the stability of the system under long term work while ensuring the wearability of the device.

Currently, portable wearable self-powered electronic devices are mainly desktop laboratory devices, which only demonstrate a concept. Since there is no work to propose a standardized manufacturing process for portable and wearable self-powered electronic devices, it is impossible to achieve complete consistency with respect to the performance of two different devices. Therefore, in the future, we need to consider the issue of performance calibration between different devices, or we can develop standardized processes for portable wearable devices that can be mass produced.

Hybrid energy harvesting technology that integrates multiple transduction methods is most likely to act as a power source for future self-powered systems. However, the large differences in the frequency, amplitude, and waveform of electrical power converted through different transduction methods make it an unsolved problem to develop power management technologies suitable for different energy harvesting methods. Furthermore, an increasing number of functional modules are being integrated into self-powered systems. We need to rationally design power management circuits to improve the energy conversion efficiency and achieve energy distribution among various functional modules. In addition, a wireless module is needed to realize the transmission of information.

So, there’s a quick introduction into piezoelectric energy harvesters within wearable devices, the main design challenges that have presented themselves when using piezo and some applications of where piezoelectric energy harvesters have been used within the professional industry already. Portable and wearable self-powered systems have made significant progress and may become the main form of the next generation of electronic devices. The rapid development of materials science, processing technology, and smart technology will pave the way for wearable self-powered systems in practical applications.

Holly Janes is a guest blogger for Piezo.com. She holds a Graduate MEng in Electronic Engineering from the University of York in the UK.

Graduate MEng in Electronic Engineering at the University of York.